How to Engage the Congregation! – Part 2: Pick the “right” songs What I learned at Feb 9th Worship Leader Meeting

How to engage the congregation: Part 3 “Balance Familiar and Fresh Songs” 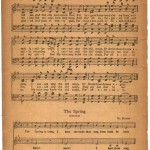 This one is fairly simple.  It is hard to sing along on a new song, so you want the majority of songs that you sing to be songs that are familiar to most people if you can.  It’s only once you learn the melody that you have enough brain power to spare to start thinking about what the words mean, and then a little bit after that you can start singing them with expression as prayers to the Lord.  This requires a maturity, a servant’s heart and sometimes an iron stomach from the band, being willing to do the same song over and over and over again. And for many of us with practices, rehearsals and multiple services, that means for every one time the congregation has heard a song, we very well might have played it at least a few dozen times.

In our band we actually have a tendency to take new songs and practice them for an hour or more, not to learn them “just like the record”, although that is a great place to start.  If you can’t play them just like on the recording, you might need to keep practicing until you can.  But once you have done that, you can keep playing it in order to come up with your own arrangement and to learn to build it up and down dynamically and really own the song so you can go to any section at any time in any order, repeat lines, have it memorized so you don’t need the music, can play it in any key …. and in our band, we often make sure we can play it on multiple instruments…. so my electric guitar player will also learn to play it on the drums and my drummer will make sure she can play it on the piano and so on.  And in addition to this, we often have younger or newer players join us for worship practice, and I have the older more experienced players mentor the younger players, so we make sure that they can play simplified versions of the same parts.  So we are doing musical discipleship RIGHT in our weekly worship practices!  So…. it’s very very easy to take an hour or more doing just one song, sometimes more than one week in a row.

It is important though, to also include fresh new songs.  If you don’t include new songs from time to time, worship can become stale.  Imagine only being able to sing the same song, the same prayer over and over to the Lord.  New songs cause us to re-engage our minds and keep us from just going on auto pilot and just mumbling our way through the words and going through the motions.  Besides, the scriptures command us over and over again to “sing a new song to the Lord” (e.g. Ps 33:3)

You need to find out the rhythm of your own congregation, how many new songs versus familiar songs they can absorb.  The younger and more passionate they are about music, the more often you can probably add new songs.  For our congregation I’ve found that about one new song a month is about right.

Another thing you can do to help songs be more familiar is to pass out the words, written music (chords) and links to audio to your congregation.  If they are listening to it on the radio, or if they have it on a CD or download to their computers or mp3 players …. they can be listening to and practicing during the week.  We are still experimenting with this and I’ll have a separate post on this whole idea.

In order to make sure the congregation learns the song in the first place, we play any new song a couple weeks in a row, give it a week off and then bring it back for one more week before we consider it a “known” song. Again, find out the rhythm that works best for your congregation.

Also remember that while you may be at church every week, in our current culture there are large groups that are only there a couple times a month, which makes teaching songs and knowing what is familiar even more of a challenge.

Another way to increase the familiarity factor is to take an older song and KEEP THE MELODY THE SAME, but play with the arrangement.  Make it slower or faster or more groovy… swing the beat, play it in a different popular style: celtic, country, rock, reggae, alternative, …

In the end, pray that God would give you wisdom as to how many new versus familiar songs to pick in order to maximize full participation and worship!

If you enjoyed this article, please consider sharing it!

This site uses Akismet to reduce spam. Learn how your comment data is processed.